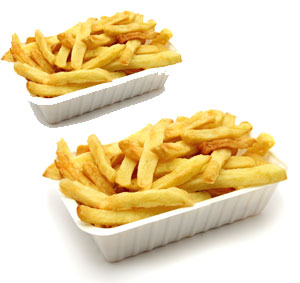 Earlier this week I was visiting a client for a new Nottingham website design and the meeting went on much longer than I had planned - the Small Business Website design that he requires is more complex and more interesting than I had at first imagined from his original briefing. I was happy to put in the extra time as through experience time spent at this stage of the website design project will save time later during the creation tasks. However, when I left his premises, I was famished.

Let's look at the mastery of this marketing approach:

Seeing the two sized portions next to each other made comparison a doddle. There was no contest, nothing hidden, and no lengthy decision time needed to reach the conclusion - the second container was twice as big as the first one.

Having compared the size, the prices had to be compared to ensure the best value for money. Again the task was made fantastically easy by the carefully chosen figures. I made two calculations - the first was to work out the difference in price (i.e. £2.00 - £1.50) and the second was to check it really was a good deal, by calculating the cost of two smaller containers (i.e. 2 * £1.50) Both calculations served to reach the conclusion - the £2.00 container was definitely the best value for money.

Not all businesses will allow for this kind of marketing, where competing products in your small business can be compared. However if they can, then make the comparisons easy in order to offer the best experience to your clients - if they are put at their ease and find the process simple, they will be much more likely to become a customer.

P.S. In the end I chose the £2.00 container which was of course the goal of the fish and chip shop owner, however from the manner which the two containers were presented, I felt I did not really have a choice - it was the only choice!

Tags for this article