For many years, many people have considered the craft of computer programming as being in decline. They believe we have been heading towards “Game Over” for the art of coding. Although pupils are taught applications such as Excel, Word or PowerPoint in schools and universities, the skills necessary to create these products are becoming increasingly rare. 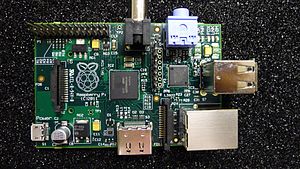 Enter the Raspberry Pi Foundation, a charitable organisation registered in 2009. They are championing the launch of the Raspberry Pi, a single-board computer, stripped to the bare minimum, and roughly the size of a credit card.

The goal is to offer a low-cost computer to encourage children in the United Kingdom to develop programming skills. It comes with the Linux operating system and some educational software pre-installed and is instantly ready for children to experiment and play with to produce results.

The launch of the first 10,000 boards commenced 29 February 2012. The two licensed United Kingdom distributors both suffered website downtime due to heavy web traffic, and both reported that they were sold out within a few minutes.

It is reminiscent of the launch of the BBC Micro back in the early 80’s, which placed an emphasis on education, and was an integral part of the BBC Computer Literacy Project. I remember the amazement and wonder I experienced when I first saw the Micro computer on the screen. I begged my parents to buy one and they agreed and sent off an order. Unfortunately for us, the demand vastly outstripped supply (the manufacturers, Acorn, had anticipated sales of 12,000 units but eventually over 1.5 million were sold) and I was never the owner of a BBC Micro Computer, although a couple of months later I was overjoyed to receive a Commodore 64.

The advantage of these early computers was you were encouraged to learn to program them. I am sure everyone shared the same sense of delight and achievement from typing the classic:

The exposure to the BBC Micro, the Commodore 64, the ZX Spectrum, and other rival home computers in the early 80’s, honed coding skills and led to the United Kingdom becoming a major force in the coding arena. David Braben (co-creator of the seminal Elite game in 1984) sees the Raspberry Pi as an opportunity to bring back the advantages of the heyday of the 80’s. He fears there is a lack of university graduates skilled in computer science and that this shortage of programming skills will have an impact in the future.

Modern computers are much less robust then their early counter-parts. It is all too easy to introduce a malicious piece of software or to delete a vital configuration file which leads to the breaking of the computer. The Raspberry Pi is a throw-back to the more rugged days, where you are actively encouraged to experiment and push back the boundaries.

Ian Livingstone, the Life President Eidos which manufactured the globally recognised game Tomb Raider, is lobbying the British government to change how computers are being taught and used in schools. He sees the use as being restricted to learning how to use an application and not to write them, which is like learning to read but not to write. The introduction of the Raspberry Pi is an attempt to right this situation and to re-introduce the delights of programming to a new generation.

However, there are always two sides to every story, and the reception to the Raspberry Pi is not always positive. Some industry leaders are saying that the emphasis should be placed on improving educational software for the existing hardware such as developing new applications. They see this approach as the solution to increase programming within schools rather than adding new hardware choices.

I believe another potential problem may be getting the teachers on board. The Raspberry Pi offers a great opportunity to invigorate the classroom and bring new skills to the students, but if the teachers are not enthusiastic and behind the move, the full benefitsmayl never be reaped. It is even possible that some of the teachers will be faced with a steeper learning curve than the students they are teaching!

Overall I am very excited about the launch of the Raspberry Pi. My work as a web designer, creating web designs in Nottingham, is based on the foundations I learnt from programming my Commodore 64 over 25 years ago. The times have changed... the languages have changed... but the underlying skills instilled from discovering how to program and create are still the same. I cannot wait to see the impact of this on the next generation...