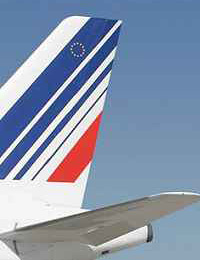 Recently I talked about 5 tips on improving your communication. In this article I would like to share an incident where the lack of effective communication caused a major problem.

A couple of months ago I booked myself and my son on the Air France flight AF1180, which leaves at 19:05.On the day of the trip we passed through the security checks and saw it was leaving from Gate 42. We also saw that there was a 15 minute delay - the time was 18:25.

We walked slowly towards Gate 42 to be in place for the boarding. My son saw the children play area was showing a film he wanted to watch, and as I could see Gate 42 I agreed to sit down and watch the television with him.

While sitting here, I could hear announcements for all sorts of different gates including the last call for the flight departing from Gate 41, and another for some passengers leaving for Singapore from Gate 23.

Just before 19:00 I thought it was strange that there had been no announcement and decided to walk to Gate 42 to ask the attendants what was happening.

We arrived at Gate 42 at 19:03 to be told the flight was closed and we could not board the plane.

I explained that there had not been any announcements. The attendants answered that they had announced the flight but that it is very hard to hear the announcements unless you are immediately in front of the Gate. They said this is due to the poor acoustics and that the situation was not ideal.

While talking, we heard calls for Gate 32 and even Gate 21. When I asked how come we could hear these calls, I was told they use a different system.

Because I had been hearing calls continuously, the communication seemed clear, and I assumed that we would be able to hear our plane being announced. The opposite however was true - it was impossible to hear our calls. I could actually see the Gate from where the plane was leaving all the time I was waiting for the communication to tell us to board, but not one announcement was audible even though announcements for other gates were clear.

Even though the communication was inaudible, the idea of this story is clear. Make your message be heard.

In almost all businesses and in almost everything we do there is a need to communicate. If we cannot get the message across, not only is it a wasted effort, there is no point in performing the communication at all.

As a Nottingham Web Designer, the message I want to get across is clear. We design modern, polished web sites for small businesses which offer great value and which look stylish and meet all the latest Internet standards.

This message is communicated by our own website, by the examples on our portfolio page, and by our expertise on the phone when responding to inquiries. If this message is not communicated, we do not get the business. It is as simple as that.

All of us as Net Quality Nottingham Web Design are constantly reviewing all of our communications to ensure that our message is heard loud and clear. Is your business doing the same? Poor or a lack of communications can at best result in no new customers or at worst alienate existing customers and cause them to become dissatisfied. The lack of clarity in the communications from Air France has resulted in me not wanting to be a customer of theirs in the future. Do not fall into the same trap...

Tags for this article